How To Take Entacapone

What are the most common side effects of Parkinson’s disease medications?

Controlled release preparations have the letters CR or HBS after the drug name.

These let the levodopa enter your body slowly instead of all at once. They can increase the time between doses.

They may be used when the dose of standard levodopa starts to wear off and the person taking it no longer feels the treatment is effective.

Keep A Medicine And Symptoms Diary

Keeping a diary is a helpful way of monitoring your condition and keeping track of your medicines. A diary can be a useful way of letting your doctor know what problems youre experiencing, any changes in your condition from day to day or over a period of time, and how well your medicine is controlling your symptoms. It can also help remind you of things you want to discuss during your appointment that you may otherwise forget. You can also use it to record any embarrassing issues that you want help with but find difficult to ask about. Examples of diaries:

Some Disadvantages Of Comt Inhibitors

These drugs can increase the side effects caused by levodopa, notably dyskinesias , nausea and vomiting.

If these side effects increase after starting the drug, people should raise the issue with their healthcare professional, as reducing the levodopa dose can often help.

COMT inhibtors will discolour urine making it a reddish-brown colour. Some people also experience diarrhoea which may occur some months after commencing the medication.

Be aware that other drugs for Parkinsons or other conditions can affect the action of COMT inhibitors. The combination of apomorphine and entacapone needs careful supervision.

Medications To Avoid Or Use With Caution 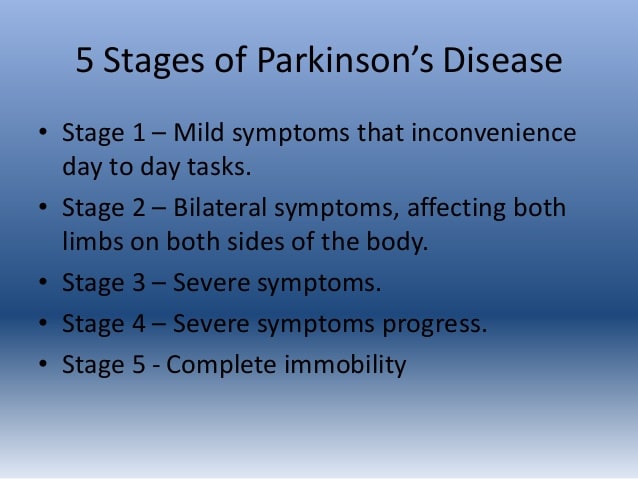 Sign up for our email list and receive our publication on medications with potential complications you should be aware of.

Before making any decisions about treatment of Parkinsons disease, you will want to learn about the different types of medications available for Parkinsons disease and discuss the pros and cons of each with your physician. It may help to know that there is no right answer, and if you try something that doesnt work for you, you can always adjust your plan.

How Is Parkinsons Treated In The Early Stages

Three main groups of medication are used to treat Parkinsons in the early stages:

The medications are usually taken in tablet form. Some dopamine agonists are also available as patches.

In the early stages, some people with mild symptoms cope just fine without medication. If at some stage the symptoms become too much of a problem, levodopa and dopamine agonists are the main medication options. They work slightly differently to each other, and some products may cause side effects more often or have worse side effects than others. But both are very effective in the early stages of the illness. That helps many people with Parkinsons to live a fairly symptom-free life for at least a few years.

Why Is This Medication Prescribed

The combination of levodopa and carbidopa is used to treat the symptoms of Parkinson’s disease and Parkinson’s-like symptoms that may develop after encephalitis or injury to the nervous system caused by carbon monoxide poisoning or manganese poisoning. Parkinson’s symptoms, including tremors , stiffness, and slowness of movement, are caused by a lack of dopamine, a natural substance usually found in the brain. Levodopa is in a class of medications called central nervous system agents. It works by being converted to dopamine in the brain. Carbidopa is in a class of medications called decarboxylase inhibitors. It works by preventing levodopa from being broken down before it reaches the brain. This allows for a lower dose of levodopa, which causes less nausea and vomiting.

Placement Of The Neurostimulator

This procedure takes place under general anesthesia so that the person is asleep. The surgical team inserts the neurostimulator under the outer layers of skin, usually just under the collarbone, but sometimes in the chest or abdomen. The extension wire from the lead is attached to the neurostimulator.

Just as your digestive tract may become weaker, so can the muscles of your urinary tract system.

Parkinsons disease and medications prescribed for treatment can cause your autonomic nervous system to stop functioning properly. When that happens, you may begin experiencing urinary incontinence or difficulty urinating.

What Other Information Should I Know

Keep all appointments with your doctor and the laboratory. Your doctor will order certain lab tests to check your response to levodopa and carbidopa.

Before having any laboratory test, tell your doctor and the laboratory personnel that you are taking levodopa and carbidopa.

Levodopa and carbidopa can lose its effect completely over time or only at certain times during the day. Call your doctor if your Parkinson’s disease symptoms worsen or vary in severity.

As your condition improves and it is easier for you to move, be careful not to overdo physical activities. Increase your activity gradually to avoid falls and injuries.

Levodopa and carbidopa can cause false results in urine tests for sugar and ketones .

Do not let anyone else take your medication. Ask your pharmacist any questions you have about refilling your prescription

It is important for you to keep a written list of all of the prescription and nonprescription medicines you are taking, as well as any products such as vitamins, minerals, or other dietary supplements. You should bring this list with you each time you visit a doctor or if you are admitted to a hospital. It is also important information to carry with you in case of emergencies. 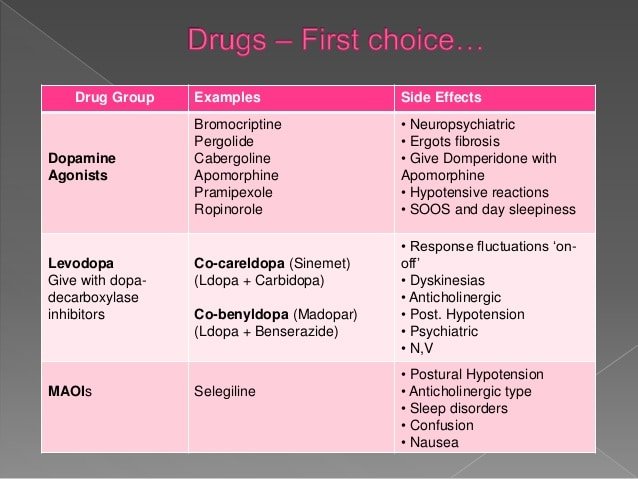 Important Information About All Medicines

There is no one best mix of Parkinsonâs medicines. You and your doctor will have to try a few treatment approaches to figure out the best one for you.

But there are some general guidelines for taking your medication. Be sure to ask your doctor or pharmacist for any specific tips for your treatment.

Are there any side-effects with Parkinsons disease medications? (Karen Blindauer, MD)

Dopaminergic Features And Their Treatment

Patients with PD usually present with features indicative of degeneration of nigrostriatal pathways. A useful clinical definition for PD is asymmetric onset of an akinetic rigid syndrome with resting tremor and a good response to levodopa. When applied by neurologists with an interest in movement disorders, this definition has a pathological correlation exceeding 98%. When treatment is considered appropriate, and this is a topic discussed in detail below, a variety of options is available. The use of dopaminergic drugs improves motor function, significantly reduces both the morbidity and mortality of PD, and improves quality of life.

Levodopa remains the drug most commonly used in PD. It is very effective in improving bradykinesia and rigidity, and in practice remains the gold standard against which other drugs are judged. Some studies, predominantly in vitro, have suggested that levodopa may be toxic. However, such data are conflicting, and some laboratory studies have suggested a growth factor-like effect for levodopa. Overall, the pre-clinical evidence for levodopa toxicity is not convincing and there are no data to indicate that any toxic action is of clinical relevance.

Dont Miss: On Off Phenomenon In Parkinsons Disease

These are the issues with the most confounding ethical impact. While hypomania subsides and depression may respond to treatment, rarely measurements are taken to exclude less obvious changes in behavior and personality. Fundamental changes in personality have been relatively seldom been studied although basic research documents the role of the STN in decision making . Relatives however report reckless and risk seeking behavior that lasts well beyond the postoperative phase. Again, these types of behavioral change may occur gradually in the natural course of the disease or as side effect of drugsbut the sudden and seemingly irreversible alteration of personally after DBS comes as a shock for families. Probably the most profound, albeit at first sight easily overlooked effects are changes in moral competences of the patients. Such changes may result in taking risks for oneself and ignoring the rights of others, exemplified by car accidents or marital conflicts . Seminars for management of such conflicts after DBS are therefore already offered with patients and spouses reporting their experiences. 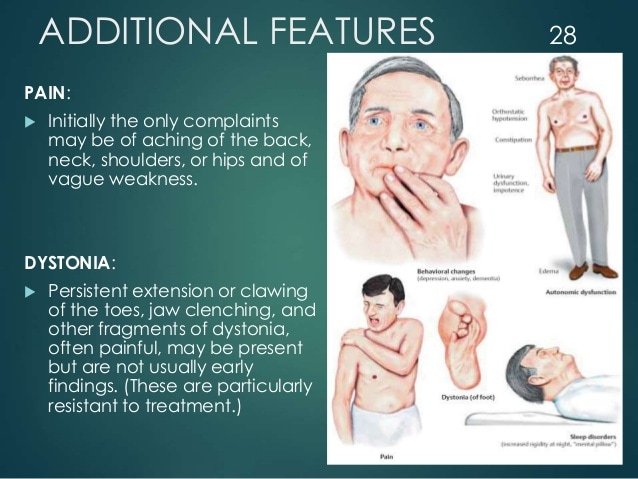 Any withdrawal from Parkinsons drugs needs to be done in a tapered way, under the supervision of a health professional.

Speak to your specialist for advice.

For people with Parkinsons disease, deep brain stimulation surgery may be helpful if the individual is experiencing motor fluctuations including dyskinesias or off episodes.

The subthalamic nucleus and the globus pallidus are two locations in the brain that are targeted in the DBS procedure for Parkinsons. Certain symptoms of Parkinsons disease can be reduced when these two areas are turned off by the stimulator. These include tremor, rigidity, slowness of movement, difficulty walking, and freezing, as well as extra movements or dyskinesia that are medication side effects. The amount of daily on time during which the Parkinsons symptoms are better controlled can be increased as well.

The best marker of whether or not people with Parkinsons disease will benefit from DBS is how well they respond to levodopa, an active ingredient in the drug SinemetTM or carbidopa/levodopa. Patients who benefit most from surgery have had a good response to levodopa. For many, this good response becomes less and less as the disease progresses.